The team members of the Mawaheb BG team and the Mawaheb Fire team arrived at Cairo Airport on Thursday morning.

The Egyptian teams won the first place, the gold medal and the 12th place in the RoboCup Junior International 2022 competition) sponsored annd supported by the “Misr El Kheir” Foundation, an Egyptian charitable organization, which was held from 11 to 17 July 2022 in Bangkok is the capital city of Thailand.

Dr. Nagwa El-Sayyed, Head of the Scientific Research and Innovation Sector at Misr El-Khair Foundation, said: The Foundation is always keen to support innovations and talents, as (Mawaheb (talents in Arabic) BG team and Mawaheb Fire team) participated in the sponsorship of the “Misr El-Khair” Foundation, sponsored the contestant teams who all came from Suez Governorate and represented Egypt in the competition that was held in From 11 to 17 July 2022 in Bangkok, the capital of Thailand.

3000 Contestants from 45 countries around the world participated in a week-long competition.

The head of the scientific research sector at the Misr El Kheir Foundation indicated that the Egyptian Mawaheb BG team was able to achieve the first place at the level of the entire championship and the gold medal in the world, in the Rescue Maze section in the Super team section, and their project was to create and program a robot capable of solving a puzzle that contains a maze to reach children who are in danger from fires and others, and the task of the robot is to save them, and there is such difficulty at different levels and surprises when the robot meets on its way to solving the puzzle of the maze and saving the children. 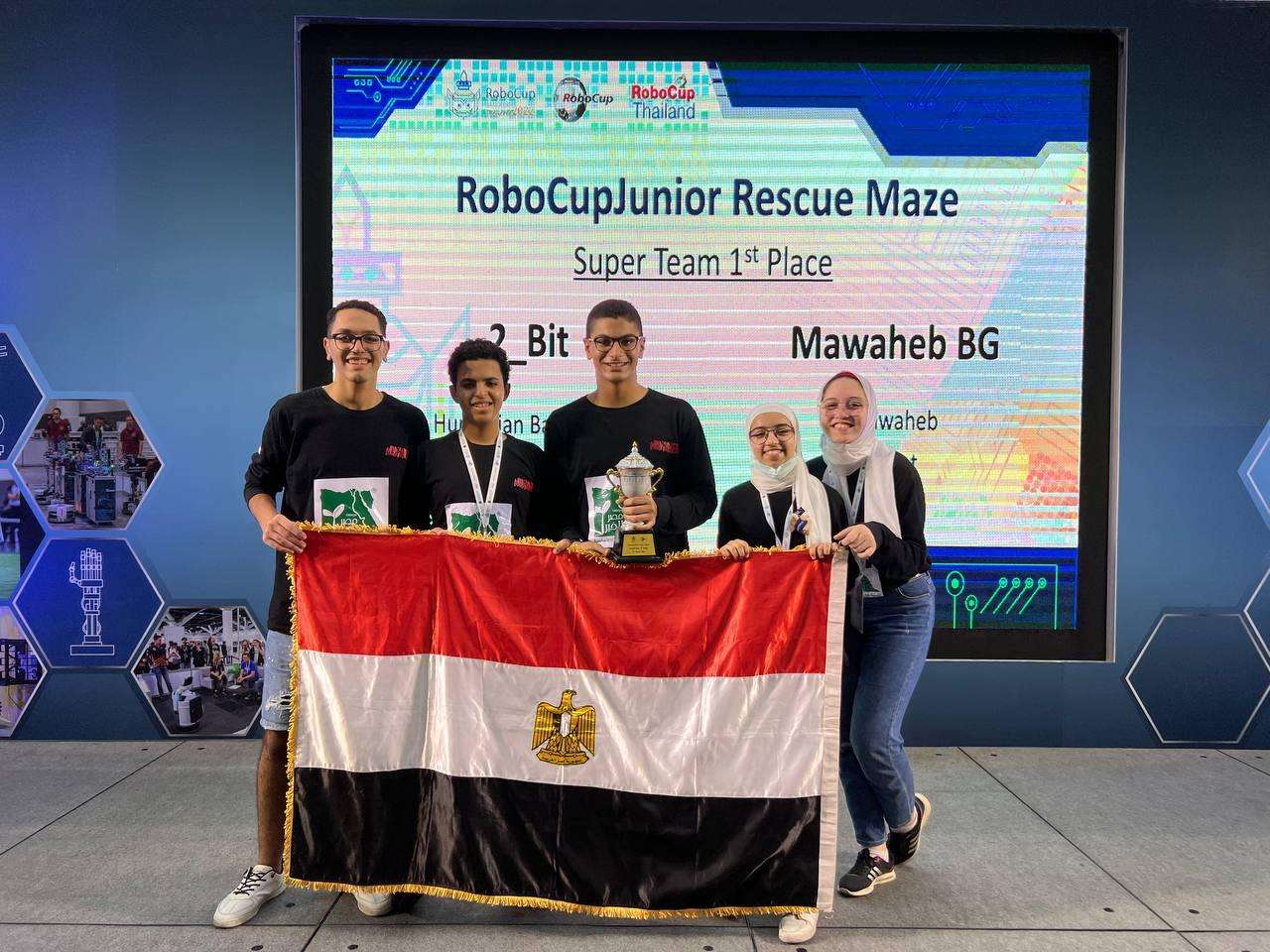 She added that the Mawaheb Fire team was able to achieve the 12th position at the level of 945 teams in the Rescue Line section in the Robocup Mission Section, and their project was to create and program a robot capable of overcoming barriers and obstacles while walking on a line and climbing curves and slopes that contain difficulties in the way of the robot and what is required to be overcome.

The project has to solve problems with smart solutions and there are different levels of difficulty.

This competition is considered the largest international scientific gathering, and it aims to develop the latest technologies of intelligent robotics and artificial intelligence.

Founded in 1997, RoboCup originally chose to use soccer as a major topic of research, aiming for innovations to be applied to socially significant problems and industries, and creating teams of fully autonomous collaborative bots that display advanced competitive behaviors and strategies.

The competition has more than 3000 participants from 45 countries around the world every year and tends to increase constantly.

It presents new challenges every year to solve a specific problem to bring it closer to practical application in the real world.