CAIRO, SEPTEMBER 19(SEE): Under the supervision of the National Council for Childhood and Motherhood, Egypt launched the first ever anti-bullying between siblings campaign.

The Council, in it’s campaign ,partnered with the Ministry of Education, Technical Education and cooperated with the United Nations Children’s Fund (UNICEF). The drive is funded by the European Union.

Bullying is considered as a form of intentional act where one or more children resort to violence against others, either face to face or through the internet, ranging from physical harm to verbal and psychological abuse, which can lead to exclusion, depression, and sometimes suicide. 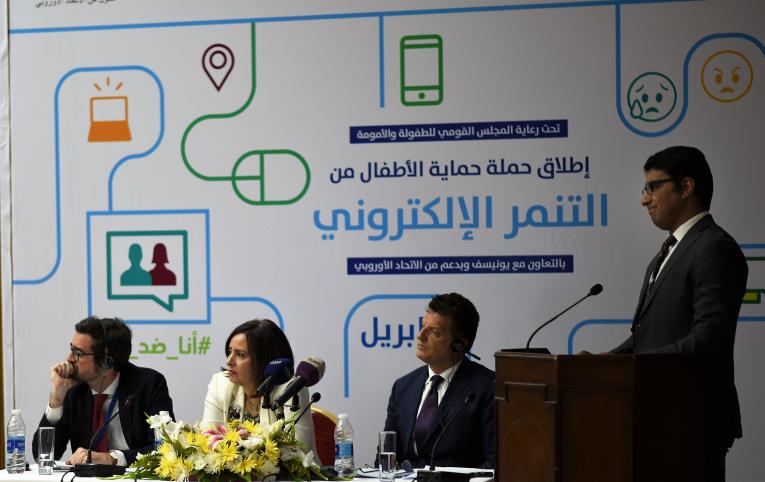 Dr. Azza al-Ashmawi, secretary-general of the National Council for Childhood and Motherhood, said: “No child should suffer the harm or extreme stress caused by bullying, which, like all forms of violence against children, increases the likelihood of disturbing healthy mental growth and leads to a sense of low of self-esteem and in severe cases to suicidal thoughts.” This campaign urges children, parents and caregivers to deal with bullying in educational and non-educational environments. El-Ashmawi added that parents should seek guidance from trained professionals through the Child Help Line “16000”, which provides 24/7 support. According to the latest international data, slightly more than one out of every three students of age thirteen to fifteen years are exposed to bullying. Girls especially are more prone to bullying in the form of sensitive images and psychological harm, while boys are more prone to physical violence.

The National Institute for Childhood and Motherhood and UNICEF conducted a research in 2015 that involved three governorates in Egypt, and concluded that the highest level of violence facing children occur at home, followed by the school. The data also showed that 29% to 47% of children between the ages of thirteen and seventeen said that physical violence between siblings is very common. Dr. Tarek Shawki, Minister of Education and Technical Education said: “The Ministry fully supports this campaign, which we hope will raise awareness among our students, educators, and communities in order to identify and address forms of bullying among children, “he added:” At a time when Egypt is undergoing a dramatic transformation towards a new system of learning “Education 2.0”, “creating a safe and enjoyable learning environment for children is our priority.”

Private sector partners have also demonstrated their support for the cause of the campaign by offering assistance through their various platforms. Several public figures, in addition to UNICEF Ambassadors in Egypt Ahmed Hilmi and Mona Zaki, presented campaign messages on social networking sites, expressing their stand against bullying. The campaign encourages children throughout the state to express their experiences and opinions of the matter and offer solutions to eliminate bullying, using the campaign slogan # Im_Against _Bullying.

With the launch of the campaign Egypt will witness continued national efforts aimed at ending all forms of violence against children. These efforts will be supported through the various platforms funded by the European Union ,in particular through the project “Expanding access to education and protection for children at risk”.

Ambassador Ivan Sorcoush, head of the European Union delegation in Egypt, said,” It is necessary for the well-being of children and their proper development to invest in resources and efforts to provide a safe learning environment for all girls and boys, environment free of bullying whether inside or outside the school.

The campaign, which was launched last week will continue until the first week of October, and will consist of  videos and audio intakes that are broadcasted on the media and social networking platforms, as well as posters in order to spread public awareness throughout Egypt.

The campaign spreads tips for children, parents, teachers and caregivers on ways to counter bullying. “Bullying deprives children of their right to play and learn,” said UNICEF representative in Egypt Bruno Mays, and all children will benefit from the encouragement of a culture that rejects bullying in order to maintain their safety and protection “We are optimistic that national efforts are committed to preventing and countering violence in and out of schools.

Biden: US, Greece Stand Together against Russia