Nabila Makram, minister of Immigration has launched the initiative of "Our Children are Stars Abroad" to highlight their successes abroad that would raise their name high in the world.

The Ministry has already received a number of success stories of our children residing with their families in other countries. The children who participated in the initiative have achieved many successes and sports championships in various fields. The Egyptian student Hamad Hussein Al-Zanati, from Minya Governorate, participated in the initiative, who won first place for the best project idea for developing education in Japan. He beat 1122 Japanese students over a competition held there. 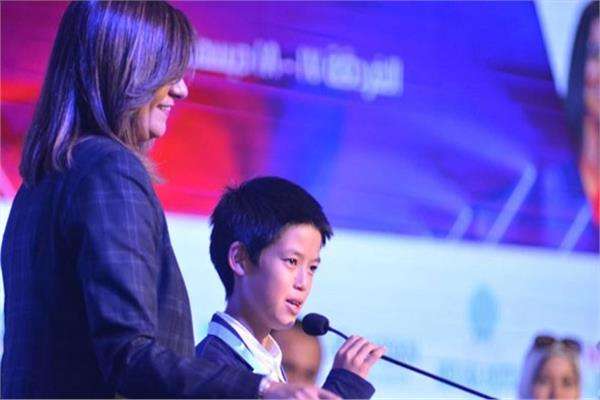 Likewise, “Yasmine Hilal Sayed Ahmed” in Germany, who has made many achievements in the field of swimming at the club level, the district and the region, and then at the level of the Germany.

She was born in 2010, and within six months of 2018 she was able to move from last place to first one on the club level, then second place at the district level, and in 2019 she became a member of the North German region team for the stage of births in 2010. In 2019, she ranked sixth with the northern team at the level of Germany, which is known also as Master Shaft. In October 2019, Yasmine won the first place in the German Swimming Federation classification for breaststroke 200 meters for those born in 2010, and won first place in relay swimming at the level of northern Germany.

On the other hand, the Egyptian-American student "Nour Moqbel" won several awards in the field of arts and  writing, the last one was her winning in March 2020 the silver medal in the American Scholastic Art & Writing Awards ( ASAWA) for her novel "Star Chasers", which is a fictional novel of literature. Her novel was chosen from among 320,000 works of art and literature submitted by 110,000 students across the United States of America (USA).

Founded in 1923, ASAWA is one of the most prestigious competitions awarded to young writers and artists in the USA. Another story of success abroad belongs to Maryam Alaa Hafnawi - a second-year middle school student in the Netherlands. She excelled in the field of rhythmic gymnastics and achieved championships and won gold, silver and bronze cups and medals for her team.

During her short sports career, she played 111 matches, including locals in the Netherlands and internationals in France and Belgium, Germany, Hungary, Luxembourg, Croatia, Switzerland and Sweden.

She achieved for her team in five years 51 certificates, 5 cups, 20 gold medals, 21 silver medals, 18 bronze medals. Ibrahim Al-Laithi - a resident of the Kingdom of Saudi Arabia - in the field of swimming and judo, also achieved first place and a gold medal in the Elite Champions League. He is a champion, a skilled swimmer, and a record breaker in butterfly, chest and freestyle swimming.

Makram renews the invitation to Egyptian families broad to send the successes of their children that they have achieved in the countries in where they reside. The minister urged the families to inform the ministry about prizes in any field, whether artistic, sports, cultural and other activities, within the framework of the initiative "Our Children are Stars Abroad."